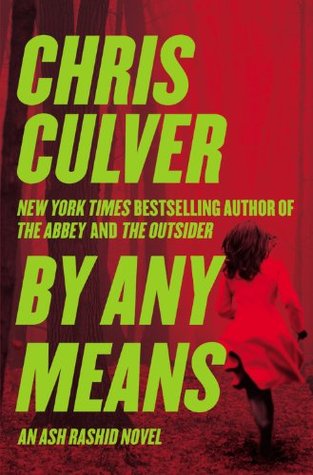 Title: By Any Means

At the end of a particularly grueling summer day, Ash is heading home to his wife and kids when he discovers a pair of bodies, shot execution style, in the front seat of a crashed vehicle. As the first officer on the scene, Ash finds himself and his department 20 minutes behind a killer in a race where every second counts. With two victims down and a third unaccounted for, the clock is ticking and Ash must find the killer before he strikes again.

This is my first time reading one of the Ash Rashid books, as there are 2 others before this one. Ash is a Muslim detective in Indianapolis and has to race against the clock to, not only catch the killer, but to save a hostage before she is killed. It’s very thrilling and suspenseful. I haven’t read many political thrillers before, but this one peaked my interest for some reason. Boy i’m glad that I read it, and it didn’t disappoint.

From the very start I was immersed in it. I was thinking that there would only be this race to catch a killer, but it goes way deeper. Ash is dealing with his religious side while also trying to solve a case, By Any Means. I was so worried about him not being able to do the job, put he is one determined character. He loves his family, but his wife isn’t so understanding. With a clever villain on the loose, Ash will stop at nothing to solve this case.

This is a thrill ride. I’d definitely recommend this to thrill seekers and non-thrill seekers alike. I can’t wait to read the next installment, but until then I have some catching up to do with the first two books.