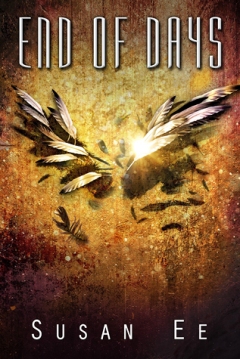 End of Days is the explosive conclusion to Susan Ee’s bestselling Penryn & the End of Days trilogy.

After a daring escape from the angels, Penryn and Raffe are on the run. They’re both desperate to find a doctor who can reverse the twisted changes inflicted by the angels on Raffe and Penryn’s sister. As they set off in search of answers, a startling revelation about Raffe’s past unleashes dark forces that threaten them all.

When the angels release an apocalyptic nightmare onto humans, both sides are set on a path toward war. As unlikely alliances form and strategies shift, who will emerge victorious? Forced to pick sides in the fight for control of the earthly realm, Raffe and Penryn must choose: Their own kind, or each other?

*If you haven’t read Angelfall or World After, please refrain from reading this review; as there will be certain things about those books pointed out here. For those who have read them, I’ll try to keep this review as spoiler free as possible*

My Thoughts: As far as conclusions go, I think that Susan did a great job. I would have liked for the epilogue to be longer and more in the future than it was. Still, great story overall and I read it twice to be sure if I am satisfied.

This story picks right back up at the ending of World After. So, there is no reprieve from that ending and the start of this. Which is good considering that there are just too many unknowns with these characters, especially the locusts. Beliel is still there but he is incapacitated at the moment. They find shelter to eat and rest, and Raffe is always the dutiful watch. He trusts Penryn’s safety with no one but himself. He doesn’t even trust Paige around her.

God, Penryn and Raffe’s longing is so palpable in this book! I wanted to reach in and shake them into submission. But, we can’t forget that Penryn is a Daughter of Man- forbidden, banned, taboo!!! And trust me, all those feelings that she has, he has them too. I swooned so much while reading this. Swear to God! Raffe is the definition of heroic. I can’t tell you anything other than I think that Susan did a great job with the pros and cons of this forbidden relationship. Penryn, for a minute, did turn into one of those whiny heroines that I despise. Only for a minute!!

Paige’s presence is heavy throughout, which was to be expected. I love that little girl and she loves her big sister to death. She struggles with her diet in this book. Well, she did in the last book too but this time it’s more. She’s fighting a battle inside herself and Penryn is watching her, helpless. That mystery of why Paige is drawn to Beliel? It’s all fleshed out. There are no loose ends with this book.

Pooky Bear!! Hell hath no fury like a woman scorned. Let’s just say that Pooky Bear and Raffe are at more odds than before. He admonishes her at every turn and Penryn just finds it hilarious. However, Pooky and Penryn do something at the beginning of the book that has fatal consequences. I was so mad at Penryn for being curious, and if i’m being honest, I wanted to know WHY too. There’s a price to pay for everything I guess. Demons everywhere!!!

Dee and Dum are back, and more eccentric than ever. Remember Laylah from Angelfall? So yeah, she’s back in this book. You will have to read for yourself to see if she’s friend or foe this time around. The is the ultimate good vs. evil war, and Penryn & Raffe must decide which side they will fight on. Characters get closure and then there are the ones that you know could make for another great series starter. *Fingers crossed*

Overall, I love this book. I think that for this being a post-apocalyptic world, this series ended great. At the start you feel apprehensive about it all, but then you get it. No one likes thinking about if their favorite character will survive or whatnot. Susan Ee did a great job with this whole series and I’m ready for more. If you haven’t started this series, I suggest that you do. If you are just waiting on release day, then you are in for a wild ride. Highly recommend this book!!!

5 thoughts on “ARC Review: End of Days by Susan Ee”