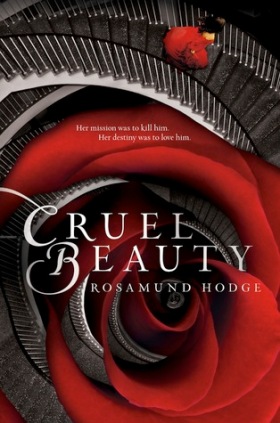 Based on the classic fairy tale Beauty and the Beast, Cruel Beauty is a dazzling love story about our deepest desires and their power to change our destiny.

Since birth, Nyx has been betrothed to the evil ruler of her kingdom-all because of a foolish bargain struck by her father. And since birth, she has been in training to kill him.

With no choice but to fulfill her duty, Nyx resents her family for never trying to save her and hates herself for wanting to escape her fate. Still, on her seventeenth birthday, Nyx abandons everything she’s ever known to marry the all-powerful, immortal Ignifex. Her plan? Seduce him, destroy his enchanted castle, and break the nine-hundred-year-old curse he put on her people.

But Ignifex is not at all what Nyx expected. The strangely charming lord beguiles her, and his castle-a shifting maze of magical rooms-enthralls her.

As Nyx searches for a way to free her homeland by uncovering Ignifex’s secrets, she finds herself unwillingly drawn to him. Even if she could bring herself to love her sworn enemy, how can she refuse her duty to kill him? With time running out, Nyx must decide what is more important: the future of her kingdom, or the man she was never supposed to love.

REVIEW: This book stressed me out. No lie. Apart from the stressing, I liked it. I love the Greek Mythology interspersed within the fantasy and paranormal elements. I especially loved the characters, and the writing is phenomenal. And, though the synopsis says this is a Beauty and the Beast tale, I felt like I was reading Strands of Bronze and Gold – based on the Bluebeard Fairy Tale. What, with all the locked rooms and dead wives.

Nyx is one of those all-over-the-place heroines. She is constantly changing her mind about her feelings. She loves, she hates. She admires, she despises. That will cause any reader to get a headache. And I did, which caused me to put it down for a few hours to get it under control before it turned full blown migraine. Don’t get me wrong, I admired her for putting on a brave face. She was going to kill the evil Gentle Lord and his demons, and free Arcadia. Only, that’s not exactly feasible now that she is inside the castle – and that changes everything about her mission.

The Gentle Lord is evil and charming at the same time. I didn’t like him at first, but he wormed his way into my heart. Shade is the same way. When you think about what he’s had to endure, you feel sympathetic towards him. Then, you want to hate him as well, because of what he does to Nyx. No spoilers, but all is not as it seems inside that castle.

I didn’t like Nyx’s father and aunt. They were just too happy inside their little bubble. I’m sorry, but if my sister were to die, I will not be sleeping with her husband. I will help with the children. That really rubbed me the wrong way. People always say, “Wouldn’t your sister/brother want their husband/wife and kids taken care if she died?” She would, but not by me sleeping with him while he’s grieving. Makes me think it was going on while the wife was alive. Just no. The sisterly bond that Nyx and Astraia have is somewhat loopy. Nyx hates her because of her father’s obvious love of Astraia. Then, she knows that it’s not her sister’s fault that their father made a bargain with the evil that lives on top of the hill.

I can’t say too much, but go into this book with no expectations. Then, you will enjoy it in it’s entirety. If you love Greek Mythology, then you will love this book. It’s so wonderfully written and carried out, that you will not want to put it down. Definitely recommended!