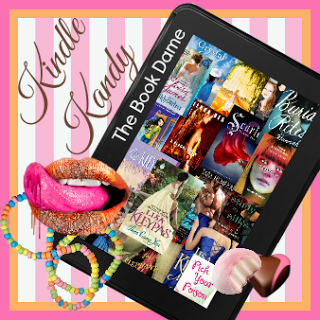 Kindle Kandy is a Friday weekly meme, hosted by The Book Dame, that spotlights books on our ereaders that we have had for a while, but have yet to read.

This is my first KK, and I have waaaay too many books that I have not read on my Kindle. To pick one is impossible, so I’ll just start off with 2 for now. These 2 have been waiting to be read for years now, and I’m sort of ashamed to have not given them my attention. *Covers link to Goodreads*

College freshman Leesa Nyland has been fascinated by vampires since she was three years old. That’s when her mom started acting weird, refusing to go outside during the day and insisting the sunlight hurt her skin because she had been bitten by a one-fanged vampire…

But fascinated doesn’t mean Leesa believes—any more than she believes in blue fire, people who live for centuries, and kisses that can kill. When her beloved older brother suddenly disappears, she is forced to confront all these and more.

Jade loves her new apartment-until a ghost joins her in the shower.

When empath Jade Calhoun moves into an apartment above a strip bar on Bourbon Street, she expects life to get interesting. What she doesn’t count on is making friends with an exotic dancer, attracting a powerful spirit, and developing feelings for Kane, her sexy landlord.

Being an empath has never been easy on Jade’s relationships. It’s no wonder she keeps her gift a secret. But when the ghost moves from spooking Jade to terrorizing Pyper, the dancer, it’s up to Jade to use her unique ability to save her. Except she’ll need Kane’s help and he’s betrayed her with a secret of his own to do it. Can she find a way to trust him and herself before Pyper is lost?

There are maybe a thousand more distributed between my 3 ereaders and computer. I’m trying to do better! I was thinking doing a spreadsheet to organize them all and start with the oldest to newest. Hopefully, these 2 aren’t that far down on the list because I really want to get to them soon. What Kindle Kandy have you got to share? Come on people, don’t be selfish!