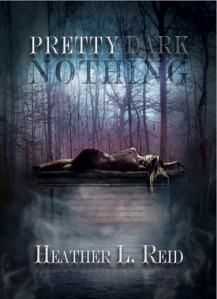 It’s been twenty three days since Quinn has slept for more than minutes at a time. Demons have invaded her dreams, stalking her, and whispering of her death. The lack of sleep and crippling fear are ruining her life. Energy drinks and caffeine pills don’t make a dent. When Quinn dozes off in the school hallway, Aaron, an amnesiac with a psychic ability, accidentally enters her nightmare. The demons are determined to keep them apart, and Aaron from discovering the secret locked away in his memory. Together, they could banish the darkness back to the underworld for good. That is, unless the demons kill them first.

REVIEW Great concept, but it lacked something that I couldn’t quite grasp. I’m on a “creepy” trip, and I was looking forward to reading this since I have it’s sequel for the blog tour. I liked it enough that I read the next book, but I still wasn’t blown away.

I was immediately drawn into the story. Girl not sleeping because she is haunted by demons in her dreams? Yes, please. I wanted to love this book, but the connection between the characters was lacking. Then, I really don’t find the whole love/hate thing alluring, especially with teens. Quinn and Aaron were completely awkward. Never really getting to the hows and whys of this story, kept me reading until the end. I wanted to know more about Aaron than I did Quinn. He was the mystery in this story. He has psychic abilities, yet doesn’t remember his past. Explain, please.

Quinn’s moodiness made her unlikable. Not to say that I downright hate her, because I don’t. I just could not get into her character. I guess her sleeplessness warranted her behavior, but she was just a tad too b***hy for my taste. It all kind of spilled out at the end about the demons and Aaron’s past. I jumped right into the next story, so you’ll get my review of that around mid August.

If you like creepy in your reading this is definitely your book. I didn’t love it, but it is hard not to get sucked in right away. A good addition to the YA Paranormal genre, I just wished that there was more to this story than a whiny insomniac who is haunted by demons. Aaron’s dreaminess is what kept this story alive for me. Worth the read!

13 thoughts on “Pretty Dark Nothing by Heather L. Reid”