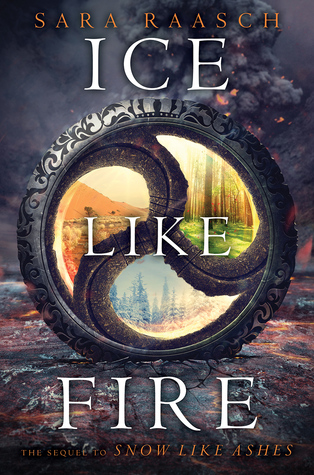 e-ARC provided by publisher via Edelweiss

It’s been three months since the Winterians were freed and Spring’s king, Angra, disappeared—thanks largely to the help of Cordell.

Meira just wants her people to be safe. When Cordellan debt forces the Winterians to dig their mines for payment, they unearth something powerful and possibly dangerous: Primoria’s lost chasm of magic. Theron sees this find as an opportunity—with this much magic, the world can finally stand against threats like Angra. But Meira fears the danger the chasm poses—the last time the world had access to so much magic, it spawned the Decay. So when the king of Cordell orders the two on a mission across the kingdoms of Primoria to discover the chasm’s secrets, Meira plans to use the trip to garner support to keep the chasm shut and Winter safe—even if it means clashing with Theron. But can she do so without endangering the people she loves?

Mather just wants to be free. The horrors inflicted on the Winterians hang fresh and raw in Januari—leaving Winter vulnerable to Cordell’s growing oppression. When Meira leaves to search for allies, he decides to take Winter’s security into his own hands. Can he rebuild his broken kingdom and protect them from new threats?

As the web of power and deception weaves tighter, Theron fights for magic, Mather fights for freedom—and Meira starts to wonder if she should be fighting not just for Winter, but for the world.

REVIEW This certainly doesn’t suffer from 2nd book syndrome. I actually like this more than the first one. Even with it’s slow pace, I like it. Love triangle-ish aside, this is one of the more world focused fantasies that I’ve read. Yes, it’s pretty character driven as well, but here there wasn’t much that washed over the the politics surrounding the kingdoms. And I really think that Meira is going to shock everyone by the time this series ends, which I’m hoping will be the next book.

This book is Meira and Mather. Each pondering their feelings and intentions more than the first book. I didn’t like those thoughts because I respect Theron. I wasn’t sure how this would play out, but I think my heart skipped a beat at the end. Theron. Theron. Theron! He loves Meira and wants to protect her, and let her be who she is destined to be. Mather, on the other hand, was all woe is me in this book. I’m not even sure his POV was needed here at all. Even though he did come through as a more strong character by the end.

Meira is embracing her title as the Ice Queen, err Winter Queen. LOL! She’s all about allies at this point, but she wants to live for her people as well. She’s the Daenerys Targaryan of this world. And she’s also protecting herself  while trying to gather these allies. Visiting the different kingdoms was the highlight of this story. It’s truly fascinating, and as I said earlier, this one is very full of world building. Politics aside, I love this part of the story.

Meira is a better character here because she’s not as impulsive and self-willed. Let’s be honest, Meira was an arrogant warrior in book one. While I find a bad axx heroine to be a good thing, that didn’t work for me. I like her in control and thinking things through, not trying to prove to idiots how strong you can be. It all works for me for some odd reason. I just hope that this series ends on a good note, because the ending of this was hard to take. Major twist, that had me saying what? why? Did that just happen? Surprises all around in the last half of this book.

It’s a slow start, but give it a chance because you want to get to the end of this book, no matter what lies ahead. I definitely recommend this series if you like fantasy books. With all the other great ones around, I wouldn’t have completely recommended it, simply because book one didn’t wow me. But, I love this one. Just give it a chance to get going.