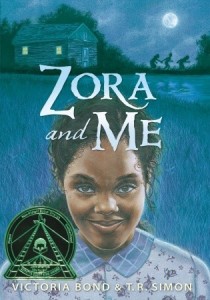 Racial duplicity threatens an idyllic African American community in the turn-of-the-century South in a dazzling debut inspired by the early life of Zora Neale Hurston.
Whether she’s telling the truth or stretching it, Zora Neale Hurston is a riveting storyteller. Her latest creation is a shape-shifting gator man who lurks in the marshes, waiting to steal human souls. But when boastful Sonny Wrapped loses a wrestling match with an elusive alligator named Ghost — and a man is found murdered by the railroad tracks soon after — young Zora’s tales of a mythical evil creature take on an ominous and far more complicated complexion, jeopardizing the peace and security of an entire town and forcing three children to come to terms with the dual-edged power of pretending. Zora’s best friend, Carrie, narrates this coming-of-age story set in the Eden-like town of Eatonville, Florida, where justice isn’t merely an exercise in retribution, but a testimony to the power of community, love, and pride. A fictionalization of the early years of a literary giant, this astonishing novel is the first project ever to be endorsed by the Zora Neale Hurston Trust that was not authored by Hurston herself.

This story is inspired by the legendary Zora Neale Hurston, author of Their Eyes Were Watching God, and many more. Though I’ve not read that particular book, I love the TV movie that Oprah produced years ago. I’m told that it doesn’t do the book justice, as it focused more on the romance than the controversial theme, “race”. Still, I loved it and I’ll read the book one day. Zora was born in Notasulga, AL (about 34 miles from where I live), but moved to Eatonville, FL at the age of three; which is where this fictional story takes place. While I didn’t like the tale of the “gator-man”, I did like it’s interpretation of what actually happens and understanding that the color of your skin should not be cause for murder. As it is, this is the turn of the century South, so it happened a lot. One sheepish woman’s deception caused a man to get killed. Like “the man” needed another reason to kill. This is just one of many reasons why there was so much death back in those days.

Zora and Me is about Zora and her best friend Carrie. Carrie tells a story of one particular summer in Eatonville, that really shows you how children make up stories to make sense of the atrocities that happen around them. As Zora tells all the kids on the schoolyard how one of the town’s own turns into a gator, more sinister things are actually happening. Kids have the tendency to block things out, or make something up to make sense of something. Zora was a great storyteller, so it’s only fitting for there to be this scary tale about a man turning into a gator. Carrie, who is Zora’s BFF, believes her when no one else does. But, there were two men – white & black – who made Carrie and Zora see everything clearly. And the woman who was the catalyst of her brother’s death, sits with remorse because she’s ashamed of being black. Her pretending to pass as a white woman caused the white man she was seeing to kill. Simple as. I can’t say that Ivory would have lived out his life, working hard, and die of old age. No one of color was safe in those days, but Gold’s deception is what a lot of light skinned or mulatto’s did to get ahead in life. Selfish, but they did.

Memorable Quote: “Why would you want to be like white folks?”
“I get tired of being colored. I get tired of seeing everything the world has to offer and settling for a big bowl of nothing.”

I enjoyed reading this book, and it brought forth those emotions I tend to get when reading something powerful. Would Zora approve of this story if she were alive? I’d like to think yes, because she herself was a storyteller. This story is less than 200 pages, so it’s a quick read. If you like historical fiction, then you would enjoy this book. Recommended.

6 thoughts on “Zora and Me by Victoria Bond & T.R. Simon”