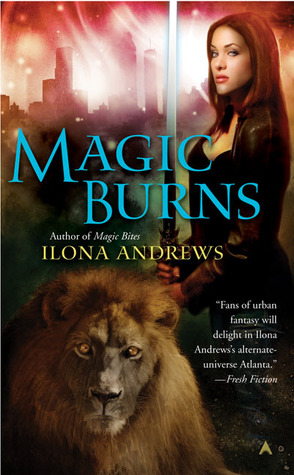 Down in Atlanta, tempers – and temperatures – are about to flare…

As a mercenary who cleans up after magic gone wrong, Kate Daniels has seen her share of occupational hazards. Normally, waves of paranormal energy ebb and flow across Atlanta like a tide. But once every seven years, a flare comes, a time when magic runs rampant. Now Kate’s going to have to deal with problems on a much bigger scale: a divine one.

When Kate sets out to retrieve a set of stolen maps for the Pack, Atlanta’s paramilitary clan of shapeshifters, she quickly realizes much more at stake. During a flare, gods and goddesses can manifest – and battle for power. The stolen maps are only the opening gambit in an epic tug-of-war between two gods hoping for rebirth. And if Kate can’t stop the cataclysmic showdown, the city may not survive…

I’m really enjoying this series so far, and this sequel just makes me want to keep going and going. I know that there may be books in the series that I won’t be too fond of, but I’m willing to go all the way. I need to catch up! There’s no slacking on the badaxxery that is Kate. Girl’s got skills and a sarcastic wit to go with them. I can’t imagine how much badaxx she can get within 8 installments already. We shall see.

More magic and mayhem going doing in the A this time, and Kate finds herself smack dab in the middle of it all. Of course, she can’t turn a corner without someone, or something, trying to send her to an early grave. Gods and Goddesses, vampires, shifters, reeves, witches – you name it, this series has it. I was a little overwhelmed with everything that was going on. Just when there was understanding of one thing, something else came along and confused me. Just the mythology and all the spell talk, had my mind running a mile a minute. I was too caught up with pack business to really care about my brain exploding though. When Curran is around, nothing else matters. His presence alone demands attention.

I love this alternate world that is Atlanta. Again, I just wanted to hop in my car and hit 85 N, just to go sit in Centennial Park. I haven’t been there in 3 years, and as I read, I was envisioning everything that was going on in the book there. I love how everything is described and you can just see it so clearly. Characters are fleshed out much the same way, in terms of appearance. I suddenly imagined the werehyena with the blue hair. Or the vampire that Ghastek piloted on the little mission with Kate. Even little Julie, with her gaunt features, was visible in my mind’s eye. Everything stood out in ways that other worlds and its characters fail to do when I read.

Great sequel, and I highly recommend this series! 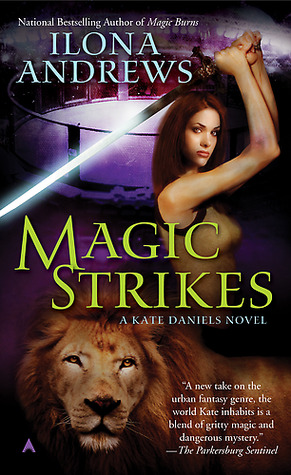 Drafted into working for the Order of Merciful Aid, mercenary Kate Daniels has more paranormal problems than she knows what to do with these days. And in Atlanta, where magic comes and goes like the tide, that’s saying a lot.

But when Kate’s werewolf friend Derek is discovered nearly dead, she must confront her greatest challenge yet. As her investigation leads her to the Midnight Games—an invitation only, no holds barred, ultimate preternatural fighting tournament—she and Curran, the Lord of the Beasts, uncover a dark plot that may forever alter the face of Atlanta’s shapeshifting community…

I hate to keep repeating the same words over and over, so I’ll make this quick.

Just when I thought the series couldn’t get better, it does. This one is a whole new level of badaxx. Not just Kate, but Curran and the other shifters too. They kicked butt in this installment. Derek gets into some trouble trying to save a girl. Jim gets into trouble with the Beast Lord, trying to save Derek. Kate is caught in the middle of it all. I was on the edge of my seat the entire time with this one. I wasn’t sure just what was going to happen, who – if any – would die. It was a fight to the death for everyone involved. I love Raphael in this!

Curran, in all his beastly glory, antagonizes Kate and gets her hot and bothered at the same time. I loved every second of it. I’m hoping for some more time with just these two together in the next book. In the mean time, I’ll be devouring his POV in between books. I think I’ll give those just one simple review when I’m done.

Great addition to the series, and I can’t stress enough how addicting this series is. Highly recommend!