When Charley is rudely awakened in the middle of the night by her best friend who tells her to get dressed quickly and tosses clothes out of the closet at her, she can’t help but wonder what Cookie’s up to. Leather scrunch boots with a floral miniskirt? Together? Seriously? Cookie explains that a friend of hers named Mimi disappeared five days earlier and that she just got a text from her setting up a meet at a coffee shop downtown. They show up at the coffee shop, but no Mimi. But Charley finds a message on the bathroom wall. Mimi left a clue, a woman’s name. Mimi’s husband explains that his wife had been acting strange since she found out an old friend of hers from high school had been found murdered a couple weeks prior. The same woman Mimi had named in her message.

Meanwhile, Reyes Alexander Farrow (otherwise known as the Son of Satan. Yes. Literally) has left his corporeal body and is haunting Charley. He’s left his body because he’s being tortured by demons who want to lure Charley closer. But Reyes can’t let that happen. Because if the demons get to Charley, they’ll have a portal to heaven. And if they have a portal to heaven…well, let’s just say it wouldn’t be pretty. Can Charley handle hot nights with Reyes and even hotter days tracking down a missing woman? Will Cookie ever get a true fashion sense? And is there enough coffee and chocolate in the world to fuel them as they do?

I absolutely love this sequel! Okay, I have a few problems with this series so far, and I’m about to start book 7 this weekend. I had planned to combine my reviews for books 2-6, but it seemed rather messy in my head, so I called it quits.

This sequel started off with Cookie’s friend, Mimi, missing, and Charley is on the case. Oh, and there’s a dead guy riding around in Cookie’s trunk. Of course, she freaks out when Charley informs her of this little information. Charley calls Garrett in to do some digging on the previous owner of Cookie’s car, While she and Cook try to find Mimi. It becomes pretty clear right off that something fishy is definitely going down, and it involves Mimi’s past. All kinds of stuff happens when Charley is involved. Now, one Reyes “hot-as-sin” Farrow is being tortured by demons who want the portal. That portal being Charley.

I love trying to solve these cases that Charley and Cookie get. I’m on the edge of my seat, screaming at Charley when she almost gets herself killed time and time again. Since I’ve caught up on these books, I’m learning more about Charley as a reaper. Still, she manages to get all messed up in each book. What good is her character if she can’t do cool stuff? Not just in spurts, I’m talking all the time. She showed her power at the end of this book, and pissed Reyes off in the process. I want her to go full disco ball and kick butt on people!

The way that Reyes withholds information from Charley gets on my nerves. I understand that she must figure it out on her own, blah blah blah, but Charley is kind of dumb. Well, maybe not so much dumb as she is silly. She thinks everything is funny. I’m sorry, but I just don’t find myself laughing at anything she says. Since I’m reading these like crazy, hopefully she will meet my expectations by the next book. I’m gonna jump ahead and say that book 6 is my favorite. That cliffhanger, though! Arrgh!

READ THIS SERIES EVERYONE. No matter the little things that irk me, I can’t get enough of Reyes, Garrett, Charley, Cookie, Amber, Ubie – the whole gang! 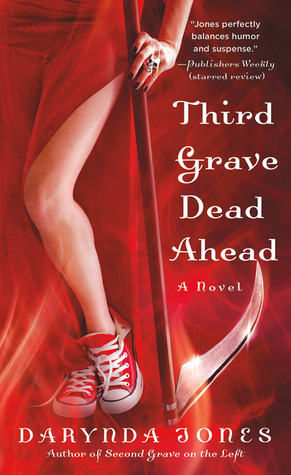 Paranormal private eye. Grim reaper extraordinaire. Whatever. Charley Davidson is back! And she’s drinking copious amounts of caffeine to stay awake because, every time she closes her eyes, she sees him: Reyes Farrow, the part-human, part-supermodel son of Satan. Yes, she did imprison him for all eternity, but come on. How is she supposed to solve a missing persons case, deal with an ego-driven doctor, calm her curmudgeonly dad, and take on a motorcycle gang hell-bent on murder when the devil’s son just won’t give up?

Okay, I’ll try to make this quick. I very much like this installment, but WTF?! I’m all cheering for Charley to solve the case and come out unscathed, and then that ending?! I had to read it again, just to make sure it really happened. Yes sir, it happened. And after all that, her father has the nerve to pull that stunt while she’s trying to recover from near death. This one had my emos all over the place.

I love the case that Charley and Cook worked on. Those two saved the day, and the perpetrator got his behind served to him on a silver platter. What gets me all thrown off guard are the numerous side stories that are in each of these books. I don’t get why, because I think one case + Reyes alone is enough. Sometimes, I’d just rather focus on Reyes and Charley. They are the sole purpose for this series, are they not? I get that Charley is a PI, but she needs to start trying to get her powers in check before its too late.

Again, love all of the characters that help Charley along the way. I’ve grown quite fond of Rocket, Angel, and the devil-child Strawberry Shortcake. LOL! That girl cracks me up. I very much recommend reading this series in order, to get full enjoyment. I’m sure my rant will come with book 4’s review next week.

Also in this series: First Grave on the Right

BTW, I know that I haven’t been replying to your comments. Trust me, I read each and every one of them, but I’ve not really been around in weeks to really sit down and respond. There is so much going on and I’ve been trying to divide my time so that I don’t completely have a breakdown. Anyhoo, I’m coming to visit your posts whenever I get a second to sit down, so I haven’t forgotten about you guys. By the time I’m done scheduling reviews at night, I’m too swamped to do much of anything. I was thinking of taking a week off, but decided against that, since I don’t want to get more behind on reviews than I already am. This series, and a few other books are prime examples. I finished reading them weeks ago. I’ll catch back up eventually…..