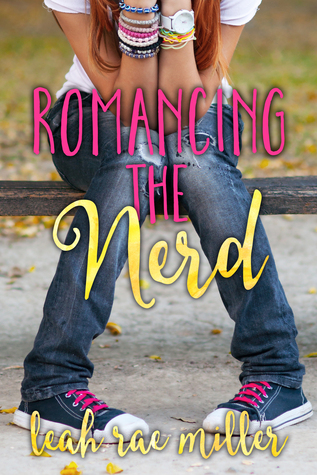 Dan Garrett has become exactly what he hates—popular. Until recently, he was just another live-action role-playing (LARP) geek on the lowest run of the social ladder. Cue a massive growth spurt and an uncanny skill at taking three-point shots in basketball and voila…Mr. Popular. It’s definitely weird.
And the biggest drawback? Going from high school zero to basketball hero cost Dan the secret girl-of-his-dorky dreams.
A tuba-playing nerd with an eclectic fashion sense, Zelda Potts’s “Coolness” stat is about minus forty-two. Dan turning his back on her and the rest of nerd-dom was brutal enough, but when he humiliates her at school, Zelda decides it’s time for a little revenge—dork style. Nevermind that she used to have a crush on him. Nevermind that her plan could backfire big time.
It’s time to roll the dice…and hope like freakin’ hell she doesn’t lose her heart in the process.

I had been looking forward to this book ever since I knew of it’s existence. The Summer I Became A Nerd was one of my favorite books of 2013, so I had to read this companion. I love the LARP fun, but I really enjoy the characters themselves more. Dan and Zelda are no Logan and Maddie, but I liked their story. I wish there was more time spent on the romance, but overall it’s a good story. If you have read the first book, then you know Miller has some role playing and other shenanigans going on here. This is a cute, fun read.

So Dan and Zelda used to kick it. Not romantically, of course, but just two nerds who love their comics and movies. But ever since Dan lost a little weight and started playing sports, he’s forgot all about Zelda. Or has he? Zelda is a band geek, and loves all things LARP. She thinks Dan is a traitor, and decides to teach him a lesson. She wants to expose him and his sudden popularity, but it all back fires. Dan likes Zelda and she him. They both have the wring impressions of each other and all it takes is an accidental hit to the head for Zelda, and Dan’s confessions online. They were so oblivious, that it was cute.

I like Dan’s character, because even while Zelda is plotting against him, we get his POV and we know his feelings for her. I don’t, however, like the manipulation that his father was so keen on doing to him. Always wanting him to play sports and become one of the popular kids. It’s always about getting a scholarship with parents these days. I get that part, but why not let him be who he wants to be? Dan’s constant lying to his father about where he was and what he was really doing got a little old. This plot plays on the nerdy boy suddenly becoming popular, so you can pretty much guess how it turns out. I would have liked a little more romance between Dan and Zelda than there was. Maddie and Logan, from book one, make appearances. It’s nice to see their growth and what they’re up to these days. They’re college students now, but they still go to the LARP games, and still work at the comic store.

If you like nerdy romances, this book is the perfect read for you. I liked this book, just not as much as book one. Still, if you’ve read that one, there’s no way to pass up on this sequel. Miller always fills her pages with great characters and lots of nerdy fun. Definitely recommend!

45 thoughts on “Romancing The Nerd by Leah Rae Miller”