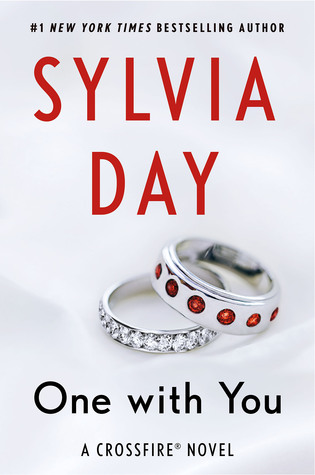 Gideon Cross. Falling in love with him was the easiest thing I’ve ever done. It happened instantly. Completely. Irrevocably.

Marrying him was a dream come true. Staying married to him is the fight of my life. Love transforms. Ours is both a refuge from the storm and the most violent of tempests. Two damaged souls entwined as one.

We have bared our deepest, ugliest secrets to one another. Gideon is the mirror that reflects all my flaws … and all the beauty I couldn’t see. He has given me everything. Now, I must prove I can be the rock, the shelter for him that he is for me. Together, we could stand against those who work so viciously to come between us.

But our greatest battle may lie within the very vows that give us strength. Committing to love was only the beginning. Fighting for it will either set us free … or break us apart.

Heartbreakingly and seductively poignant, One with You is the breathlessly awaited finale to the Crossfire® saga, the searing love story that has captivated millions of readers worldwide.

*Jazmen, you are my own personal Jesus Christ. I thank you!*

As you guys may know, I’ve been pining for this book since I finished Captivated by You last summer. I can’t exactly count how many times I’ve actually reread each book, since I first started this series in March of last year. I will just randomly start one of them and go from there. They’ve all been amazing reads, and I’ve never rated below 4 stars. Until now. I was tempted to go with 3.5, but that would be saying it was more than okay. I really liked reading this, because I love the characters. I’m peeved by the lack of closure.

When I first started this book, I was giddy as hell….

By the middle, I was wondering when the big moment would hit. I wanted something profound to happen between Gideon and Eva.

And then something happened that rocked me. This is me around 77%…..

The Big Finale. Oh wait, there wasn’t one.

After all this time, and this is all we get….

– Gideon and Eva are still in therapy. They still have to work on opening up, not panicking, abstinence (HA!), and all their other problems. So, nothing new in that department. What is interesting is Gideon’s feelings towards all things love and family. I love how Sylvia gave us his POV in those moments, because we feel his emotions during the whole thing. Gideon is a well developed character. The world knows him as the powerful, take charge man. They don’t know of his past, or the family problems, nor do they know what he did to keep the woman he loves in his life. He’s an alpha male to his core, but he has weaknesses just like everyone else. Eva got him something. I outright laughed, because I was sure that he wouldn’t want it. That was just too darn cute!

– Eva is changing. She’s moving forward, and wants Gideon to be okay with all the things that she does. I won’t spoil it for you, but she threw him off kilter throughout the book, with just her being Eva and the domesticity that they now have forever. She reassured him often, and I love how they solved their problems. She’s talking to her mother more, and asking for advice. In fact, you will have more Monica in this book than the previous installments. Eva’s tendency to want Cary living with her and Gideon has always rubbed me the wrong way. I get that she brought him to New York with her, and she loves him like a brother. The thing is, in order for them to be happy in NY, they have to live their lives. She isn’t supposed to have Cary around forever if she wants a life with Gideon. Cary is a grown man, making his own moves, so he doesn’t need her like that. The only thing I’ve wanted for them is that they never stop talking to each other when their lives head in different directions. Not still living under the same roof, now that she’s married.

So, does Cary’s situation change since the last book?

I seriously don’t know what happened here. The situation with Titianna is weird. Cary wants Trey back. Titianna wants Cary to herself. When he doesn’t give her what she wants, she moves on. Yet, nothing ever gets settled! In the end, Trey is around. But I don’t know if he’s around because of what happened, or if he and Cary are back together. Jesus, it gave me a headache. This is not the ending I saw for these characters. With how well the author delivered all this drama, you’d think that she’d at least get dramatic at the end. Didn’t happen, and that was kind of boring. I feel like this book reads like a script. Leaving all this somewhat open, to come in and fill it up with scenes. That’s just how I feel about it all.

There’s some brief communication with Corinne and Deana. Not worth mentioning here, so….moving on. Ann Lucas is a nut-job! I seriously knew that the woman was more than a little lovesick over Gideon. This woman…..OMG, just wait for it! If you’ve read this book, let me know if you were surprised about this whole messed up scenario. That saying that psychiatrists are more messed up than their patients, is true in this case. Ann is a devious little woman. Which brings me to my next point.

Cue my reaction at 77%. That did not need to happen. Why? Why did you even have to go there Sylvia Day? Answer me!!! I feel that was too dramatic, even for the Crossfire series. I’m mad about it. Even after I’ve finished, I still can’t get over it. That came out of nowhere, and just made the rest of the book sad. I couldn’t even revel in the arrival of the Reyes family, because I was just too upset. IT. MAKES. NO. SENSE!!!

I love Gideon’s budding relationship with his sister Ireland. All that animosity between Gideon and Christopher? It’s explained, in a nutshell. All I know is that, Gideon showed Chris Sr. something, Chris Sr. talked to Christopher, and BAM! No more love lost. Total fail. I wanted that to be played out well. I wanted to get Christopher’s reaction to everything. I wanted Gideon to get his reaction. He deserves it after all the anger that Christopher has had towards him their whole lives. Gideon’s mother hasn’t changed. Not that I expected her to, but I wanted a big show down between her and Eva. Instead, Gideon got what he needed off his chest. He had the right to voice his pain. I just wish Eva would have had a say as well. Chris Sr. is really supportive of both Gideon and Eva in this book. I love that part more than anything, because for so long Gideon had no one. Victor Reyes comes to town. I feel bad for the guy, now that I’m processing it all. Read the book to find out what happens in the end. It really makes no sense how this story wraps up. To me, at least.

Gideon and Eva both spend time with their friends. I love Mark, Shawna, Steven, and the gang. I just wish that the door was closed between Eva and Arnoldo. He doesn’t exactly like Eva in the previous books, and he doesn’t hide that fact from Gideon or Eva. There just needed to be an interaction between those two. Otherwise, why even have that between them to begin with. I don’t like loose ends. Manuel is as whorish as ever. LOL! Love him and his flirty ways. Arash is also in this book a lot. He kind of has to be, since he’s both Gideon’s and Eva’s attorney. I love the banter between him and Gideon. Their bromance is solid.

Lastly, Monica’s past is revealed. Not at all what I had in mind, but…. whatever. Half of this book seems like a rush job to me. I just can’t get over how ALL the story arcs get little to no closure. After everything we’ve been through with these characters, this is what we get? Some readers are happy with this ending, I’m not. Again, I very much loved my time with Gideon and Eva, but this book failed to close everything up tight. It did not go out with a bang like I imagined. There was a bang, though. Wait for it…..

The book isn’t terrible, so I think a lot of fans will be happy with it. I’m just not most fans. I like for EVERYTHING to make sense in the end. I think 3 stars is the best I can do here. If you are a fan of this series, then you can’t just bypass this book. It’s not the best in the series, but it’s not the worst series-ender ever either. I hope you all love this more than me if you read it. I just feel like we can do more than good with this. I wanted greatness, and it didn’t happen. I’m kinda bummed, to be honest.

Also in this series: Bared To You | Reflected In You | Entwined With You | Captivated By You

34 thoughts on “One With You by Sylvia Day: Why I Feel It Didn’t Quite Deliver”