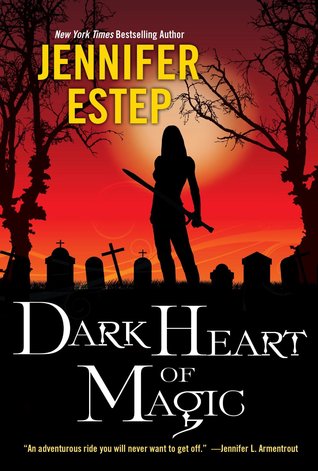 Something Wicked This Way Comes…

As a thief, I stick to the shadows as much as possible. But when the head of the Sinclair Family picks me to compete in the Tournament of Blades, there’s no escaping the spotlight—or the danger.

Even though he’s my competition, Devon Sinclair thinks I have the best shot at winning what’s supposed to be a friendly contest. But when the competitors start having mysterious “accidents,” it looks like someone will do anything to win—no matter who they hurt.

As if I didn’t have enough to worry about, mobster Victor Draconi is plotting against Devon and the rest of my friends, and someone’s going around Cloudburst Falls murdering monsters. One thing’s for sure. Sometimes, humans can be more monstrous than anything else…

Dark Heart of Magic is the second book in the Black Blade trilogy, and it starts out with mystery, monsters, and death. It was so good to be back with Lila, Devon, and Felix. Even Oscar, Lila’s hot-tempered pixie nanny. Enemies, new and old, are plotting and killing and it’s up to Lila to find out the who’s and put a stop to it. Besides, she’s a Sinclair now, and she can’t let the ones she consider family and friends to get hurt. Someone is going around killing monsters, and sabotaging the annual Tournament of Blades. It made for an interesting read.

Lila is now bodyguard to Devon Sinclair. She also has a hard time fighting her feelings for him. She keeps telling herself that they are better off as friends, but that attraction is hard to keep at bay. This year, the Sinclair family has chosen Lila, among a few others, to compete in the tournament. Along with this comes jealousy from a fellow family member, and also the taunts from Blake Draconi. I loved all the moments spent with other characters; whether they are friend or foe. The little moments of tension whenever Felix was in the presence of his forbidden lady, were hilarious. As much as Felix flirts, his demeanor completely changes when she’s in the picture. Romeo and Juliet anyone? We can’t forget the life Lila had before becoming wrapped up in mob family rivalries. She was a thief, and darn good at her job. Her knack for finding out things is just part of her scheme.

I enjoyed the mystery of this book, and the tournament. I really just wish that Lila would stop dragging out the inevitable when it comes to Devon. I really like him, and he’s so strong and very in tune with her. I just hate the dragging of this romance. If these two won’t end up with each other, then I see no need to even have them pining like this. What’s the point? Other than that, I liked this book very much. Lila is so smart and deadly, to be such a young lady. This book picks up right after book one ended, so it’s not like it’s months apart; but Lila has grown a lot in some aspects, but she also is still this young girl who doesn’t know what to do about her feelings. Devon has definitely changed since the last book. I guess with the immediate threat to his life gone, he’s able to be himself and open up more. He’s hot. Felix is hot. I swear there’s not a single person in this world, male or female, that’s not beautiful. Definitely unrealistic – but this is fiction, so……. If you love urban fantasy, and want something lighter than the adult fiction you’re used to, this trilogy is a great one to read. I think young adults would enjoy this one as well. Recommended!

Also in this series: Cold Burn of Magic

30 thoughts on “Dark Heart of Magic by Jennifer Estep”