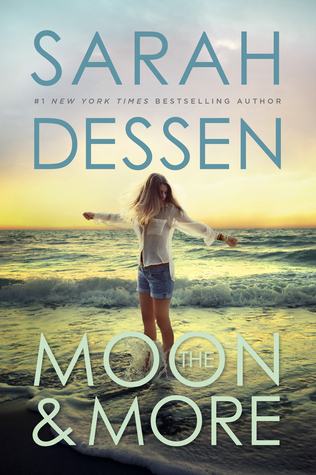 In her eleventh novel, Sarah Dessen returns to the beach town of Colby, setting of some of her best-loved books. Emaline is a Colby native, and so summer at the beach for her means hard work and a new population of beach goers. During this, her last summer before college, Emaline meets Theo while working for her family’s rental business. He’s a city boy who’s come to Colby as the assistant to a high-strung documentary filmmaker who’s in town to profile a reclusive local artist. Emaline knows he’s not her type, but she can’t help feeling drawn to him. And as their relationship develops, Emaline finds herself questioning her own goals, values, and choices in this classic Dessen romance.

I had originally intended to do a mini review mashup of the five Dessen books I’ve already read, but I’m sitting here with a migraine, so I need to do this one review and get away from this light screen. This is my favorite of the five, but The Truth About Forever is a close second. There’s just something about the beach town, Colby, that I love to read about. I’m quite sure that I’ll be reading some more this week, so I want to get these reviews out of the way. I’m still behind!

The Moon and More started out quite engaging, then took a turn I wasn’t expecting, but ended great. There are little things that irked me about certain characters, but overall I really love this book. This is Emaline’s last summer of freedom before she starts her journey to college. She spends her days greeting and taking care of the vacationers that rent out beach houses that is run through her family’s realty. She also has plans to spend as much time with her family, boyfriend, and 2 best friends before she leaves; even if Luke, her boyfriend, will be going to the same college as her. But….this is not a perfect world, so her summer plans all fall to the wayside when she and Luke grow apart and a hotshot filmmaker and her assistant come to town. Along with all of this, Emaline has daddy issues. Let me be clear; she has parents – her mother and step-dad, but her biological father has been absent her whole life but they recently reconnected. Or so she thought. He let her down badly. I won’t spoil the hows and whys, but her father is one of those people that think Ivy League schools are the ONLY way to get a real education.

As Emaline and Luke break up, she then starts seeing Theo, the filmmaker’s assistant. IMMEDIATELY. I actually groaned aloud when it happened. That was when it started to go the wrong way for me. And Theo didn’t help. He was…I just don’t know how to accurately describe his character. He’s ambitious about all aspects of his life. Nothing wrong with that, but he was just too animated for my tastes. Making rash decisions and assuming too much, and he totally made an a** of himself. And on top if it all, I feel like he manipulated Emaline into being his girlfriend so that he could get close to the subject of his boss’s documentary, Clive Conaway – a local who owns a few businesses in Colby but actually used to be this big artist back in the day. I love Clive. He was just so darn welcoming and easy going, that you can’t help but like him. Back to Theo…. He was all, “I was a huge dork in highschool and picked on and never had a girlfriend and and and.” Going on and on about THE BEST EVER first date-first kiss-first first first first! Seriously, this dude annoyed me to death. But his true colors shined brightly when it was time to showcase Clive’s art.

Emaline also spent time with her half brother Benji when he and her father came to town. I felt really bad for her, with how her father avoided the big topic and the way he just let his work take away spending time with his kids. He is truly a selfish man, and I just couldn’t find it in me to care for him in any way. I love the relationship that Emaline had with her mother. I even liked Luke, no matter if they broke up. He was there for her and they both just realized that they were both growing and heading in different directions, but he would be her friend no matter what. I love that one of her best friends is a guy. Morris may have been a sluggish character who couldn’t hold a job long, but he had problems of his own. I think the ending was pretty close to perfect for this story. I was smiling when I read the last sentence.

If you love summery reads with some realistic characters and an awesome beach setting, this book will be a great one to add to your shelf. Emaline is a great character that found out a lot about herself, life, and just deciding to make wise decisions while trying not to get too dragged down by her hometown and parental expectations. Her parents wanted what’s best for her, but didn’t feel she needed to go to an Ivy League school to have a bright future. Her father had high expectations, but I’m so glad that Emaline learned a lot about how he really is and tried not to let the disappointment and hurt show. This is a great book, and would have been a 5 star had Theo not entered the picture and the instant relationship hadn’t formed. Other than that, I definitely recommend this one!

24 thoughts on “The Moon and More by Sarah Dessen”