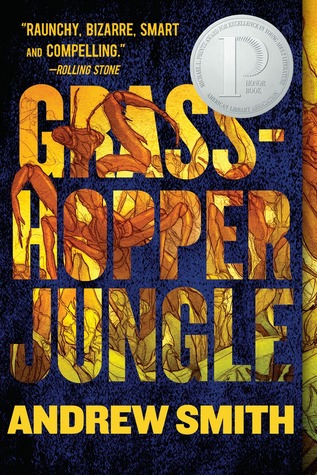 This book hurt my brain. Not in a bad way, of course. The narrative is very complex, but it all comes together in a fitting way for this tale. Forget what you think this book is about. I went into it, somewhat, blindly. I had this strange picture in my mind of some giant insects (and that part is true), but I had no idea I would be in for a crazy ride. I fear roller coasters, snakes, spiders even. I now fear the world in this book. Crazy weird doesn’t even begin to describe this. Apocalyptic aspects aside, the narrator is one of the most peculiar protagonists I’ve ever had the pleasure of reading about. I was gripped from the very first page.

Austin is your average teen boy. He’s horny ALL THE TIME! Seriously, every other thought is about having sex with his girlfriend, Shann, in the back of his gay best friend’s dirty car. Thinking about going into a dark room makes this dude horny. After I got used to his voice, the story took off. Not at a fast pace, but things started to take shape and there was no going back. Robby and Austin have this friendship. Robby, obviously likes boys. Austin is having some sort of sexual identity crisis after kissing Robby. And liking it. At this point in the story, I’m groaning. Not because of Austin’s sexuality dilemma, but because I was dreading the back and forth that was sure to come. I think forcing someone to choose between a boy or a girl is wrong. I do, however, think that a person who is in Austin’s position needs to be with someone who doesn’t care about his bisexuality. That said, I didn’t really like the way that Austin strung Shann along. Even after all that they went through, Austin was still undecided about a lot of things. I kind of felt bad for Shann, being stuck in this world with Austin. I won’t spoil where they all end up, but it just seemed kind of wrong to me. Then again, they had bigger problems than worrying about relationships. Like, staying alive!

This is like some kind of drug-induced dream, right here. I like the originality of the story and I don’t think I’ll ever read something this mind-boggling again. Unless, of course, Smith decides to hit us again with this craziness. There’s lots of horny thoughts, talks of balls, giant insects, pizza, historic accounts, and lots of cigarette smoking. I can’t really explain this any more without spoiling. If you want to get mind-f***ed, go right ahead and grab this book. You will end this book and question what it is that you just read. I did. I think all authors are creative in their own right. Andrew Smith is on a whole other level than most, and I’m eager to grab his back list titles. I think if Shann hadn’t been in the picture, I could have really got behind Austin and Robby together. But…she was and it was tiring when Austin just wanted both of them. Then again, it did make this whole story even more intense. Grasshopper Jungle is not like any book I’ve ever read. I highly recommend this if you are into the strange. It has the strange.

I'm sitting here trying to decide what books to pluck from my TBR pile for June. June is my favorite month, as it celebrates Pride and Caribbean Heritage. I'm not feeling it right now, but I just stacked some randoms for this photo. As for audio and ebooks, I have hundreds to choose from, so whichever I feel like reading, I'll read. I also have some nonfiction reads that I'm looking at right now that cover a range of subjects. Ugh, 2020 is so messed up and I'm so tired. And I can't sleep. Stress is doing numbers on my blood pressure. I seriously have slept a total of 5 hours in the last 2 days. Anyways, are you guys doing any readathons in June? I'm not easily distracted right now, so I may not read much for the foreseeable future. I have no idea if any of these books will be cracked open. Plus, I have 4 preorders coming that I was looking forward to reading, and now I just don't know if I will. Everything is just so infuriatingly unfair. . . . . . . . . #junetbr #readcaribbean #caribbeanheritagemonth #caribbeanfiction #fiction #howtoloveajamaican #alexiaarthurs #untwine #edwidgedanticat #thetruehistoryofparadise #magaretcezairthompson #drown #junotdiaz #landofloveanddrowning #tiphanieyanique #historicalfiction #caribbeanhistory #storycollection #bookstagram #bookstack
I've just been....... raging these last few weeks. I can't understand any of it. Well, I can understand the racism because that is never going away. NEVER. Hope and pray to your heart's content, but racism is what this country was built upon. The thought of it changing is what makes the racists become bolder. We live in a digital world now, so more people are seeing what it's truly like for the first time. Or they've just been terribly naive about it. I wouldn't dare bring a child into this world. Racism is only 1/4 of that decision. The rest is....well, if you don't believe in science then I won't bother explaining climate change and extinction to you. Humans are the most invasive species this planet has ever had. It gets worse by each decade. I'm sick of it all. *rant over* . . . . . . . . . . . #bookstagram #onenightingeorgia #summerbooks #summertbr #celesteonorfleet #amistadbooks #booksandsocks #socksandbooks #booknerdigans #bibliophile #fiction #racerelations #historicalfiction #roadfiction #malcolmxwasright
Happy #stacksaturday 📚! @acevedowrites should have her own appreciation day. 🥰🤗😉 💗 💗 💗 💗 . . . . 💗 💗 💗 💗 . . . . #elizabethacevedo #clapwhenyouland #withthefireonhigh #thepoetx #epicreads #harperteen #bookstack #bookstagram #booknerdigans #bookdragon #yabookstagram #yabooks #youngadultbooks #yalit #youngadultlit #latinxauthors #nationalbookaward #readlatinx #readcaribbean #favoriteauthor #favoritebooks #coverlove #bookspines #booksinverse #novelsinverse #poetrybooks #booksaremagic #funkosandbooks #funkodirectors
Happy Tuesday ♠️♥️♥️♠️♥️♥️♠️ . . . . . . . . . . . . . . #summerbooks #summerreads #nightmareverse #llmckinney #abladesoblack #abladesoblack♠️ #adreamsodark #adreamsodark♥️ #aliceinwonderland #fantasy #fantasybooks #fiercereads #buffythevampireslayer #reimagining #retelling #diversebooks #weneeddiversebooks #wocwriters #womenwriters #yafiction #yabooks #yabookstagram #youngadultbooks #bookstagram #blackbookstagram #squarefish #avaduvernayfunkopop #funkopopdirector
I was looking specifically for Pacific Islander writers when I came across Shark Dialogues, by Kiana Davenport. Now, I love Thrift Books, don't get me wrong. But I clearly put the "very good" copy of this book in my cart. This isn't very good; I wouldn't even call it good. Alas, I shall just shut up and get the most out of my reading experience. It only cost $4 and some change, anyway. I'm trying to pull ahead so I can read the rest of my #asianpacificamericanheritagemonth TBR, because I've clearly already read two books that I had no intention of reading yet. I totally suck at sticking to TBRs. What are you reading this weekend? 🦈🌺🦈🌺🦈🌺🦈🌺🦈🌺🦈🌺🦈🌺🦈🌺🦈🌺🦈 #sharkdialogues #kianadavenport #hawaiianhistory #historicalfiction #magicalrealism #bookstagram #plumebooks #quarantinereads #mayreads #maytbr #fridayreads #booknerdigans #bibliophile #instareader #bookandsocks #hawaiilife #hawaiianwomen #pacificislandliterature #piheritagemonth #aapiheritagemonth
The days are winding down, and I'll be back at work by the end of the month. I've not read as many books as I'd like since the end of March, but I'm ahead of my goal, so i can't complain. Between doctor visits and Netflix, it's been hard to read more than 2 books per week. Still, I have to hope that I'll keep my pace once i go back to work. Have you read a lot since all this hoopla began? . . . . . . . . . . . . #maytbr #mayreads #asianpacificamericanheritagemonth #aapiheritagemonth #asianamericanwriters #amytan #thejoyluckclub #bookstagram #booknerdigans #bookcommunity #fiction #vintagecontemporaries #literature #literaryfiction #classicliterature #classicfiction #instaread #instabook
Happy #stacksaturday 🤗 🧡 🤎 💛 💗 💜 #summerreads #summertbr #books #instabooks #instareader #bookstagram #blackbookstagram #blackbookstagrammer #booksandcoffee #coffeeandbooks #redatthebone #jacquelinewoodson #gingerbread #helenoyeyemi #itsnotalldownhillfromhere #terrymcmillan #fiction #booknerdigans #summerbooks #bibliolife #thatbooklife #booksaremagic #riverheadbooks #ballentinebooks #blackwomenwriters #readblackwomen #diversebooks
Happy Monday 🥰 Where are all my Twihards at? Waking up to good news this morning put me in a great mood. I was all prepared to be a b**ch when I woke up. Yeah, I was grouchy as hell, and then I opened up Twitter and started screaming. We've waited a long time for Edwards's POV, and now it is happening. Okay, time to get back to reading. I haven't started Tea Girl, yet, but I just wanted to put some orange on your feed today. 🧡🔶️🧡 . . . . . . . . . . #sockmonday #theteagirlofhummingbirdlane #lisasee #asianpacificamericanheritagemonth #bookstagram #bookcommunity #bookish #instaread #fiction #domesticfiction #literature #orangebooks #orangesocks #booksaremagic #bibliophile #booknerdigans #scribnerbooks #booksandsocks #socksandbooks
Happy May 1st! Which means it's #asianpacificamericanheritagemonth! 🌺🌸 Here are a few that I'll be reading this month, along with a few more that I hope to get to. I also have my regular TBR which is only four books. I just have to get through as many of these as possible. I'm looking at around 11 books total. I totes have this. I think. What are you reading this month? . . . . . . . . . #maytbr #freefoodformillionaires #theteagirlofhummingbirdlane #thejoyluckclub #slumdogmillionaire #hweehweetan #vikasswarup #sharkdialogues #longlivethetribeoffatherlessgirls #talesofthetikongs #mayreads #bookstagram #booknerdigans #thatbooklife #booklover #instareader #instareads #instabooks #bookcommunity #coffeeandbooks #worldliterature #fiction #literature