Welcome to my stop on The Cat King of Havana blog tour, hosted by Irish Banana Tours. Check out my thoughts on the book and don’t forget to enter the giveaway at the bottom before you leave. 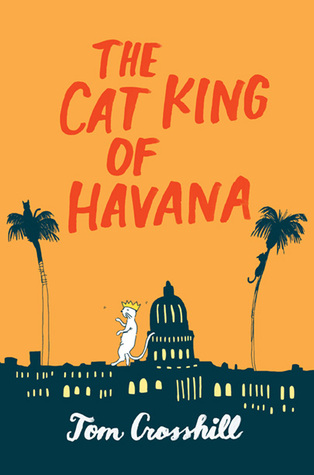 Rick Gutierrez is . . . the Cat King of Havana! A cat-video tycoon turned salsa-dancer extraordinaire, he’ll take Cuba by storm, romance the girl of his dreams, and ignite a lolcat revolution!

At least that’s the plan.

It all starts when his girlfriend dumps Rick on his sixteenth birthday for uploading cat videos from his bedroom when he should be out experiencing the real world. Known as “That Cat Guy” at school, Rick isn’t cool and he knows it. He realizes it’s time for a change.

Rick decides joining a salsa class is the answer . . . because of a girl, of course. Ana Cabrera is smart, friendly, and smooth on the dance floor. Rick might be half-Cuban, but he dances like a drunk hippo. Desperate to impress Ana, he invites her to spend the summer in Havana. The official reason: learning to dance. The hidden agenda: romance under the palm trees.

Except Cuba isn’t all sun, salsa, and music. There’s a darker side to the island. As Rick and Ana meet his family and investigate the reason why his mother left Cuba decades ago, they learn that politics isn’t just something that happens to other people. And when they find romance, it’s got sharp edges.

The Cat King of Havana is full of fun, dance, culture, and love. I love the characters, and the settings of New York and Cuba just added so much to the story. Rick is one of the coolest, geekiest teens I’ve ever had the pleasure of reading about. His love for cat videos is just the icing on the cake. He starts out with the plan of getting the girl, but he learns so much more about his mother’s history and the politics that shapes the lives of the people that he hardly knows anything about.

Trying to keep his deceased mother’s memory alive, Rick now runs one of the most successful cat video websites around. He’s content with his introverted ways and doesn’t think about anything else. Once his girlfriend dumps him because he is always in front of his computer, he thinks that maybe he does need to get out more. Of course, this comes after he mopes around the house and his dad suggests that he find something else to do with his time. He takes a gig with a local band, playing for a dance group. There, he sees Ana for the first time. What does he decide to do? Take dance lessons to get close enough to talk to Ana. When he tells his dad about his dancing, he also says he wants to know more about his Cuban mother’s history. And so the story takes off as Ana and Rick dance away; all the way to Cuba.

Grief comes in many forms, so I can’t judge Rick’s dad for his distant behavior. I’m sure the loss of his wife was heartbreaking. Rick tries to remember her by looking at cat videos; something his mother loved before she died. They coped in their own ways, and I can respect that. The salsa dancing is something I haven’t come across in YA books (maybe I need to up my game), but it was a nice touch. I love the rhythm of the story as the characters danced to the music. The Spanish slang throughout made the dancing and music much more real, so it was easy to picture these characters going through the motions.

The Havana setting was so needed here. It wasn’t just about a half-Cuban teen trying to impress a girl. It was about the history of Cuba and its culture. I think the author did an amazing job of exploring this side of Rick’s family. I love even more how it ended, despite  what transpired this tale in the first place.

Overall, an enjoyable read filled with laughs, dancing, music and culture. I definitely recommend this one to fans who want something different in their young adult contemporary reading. The love, family, and friendships in this book are very well done and I can’t wait to read more from this author.

Tom Crosshill’s fiction has been nominated for the Nebula Award (thrice) as well as the Latvian Annual Literature Award. His stories have appeared in venues such as Clarkesworld, Beneath Ceaseless Skies and Lightspeed. In 2009, he won the Writers of the Future contest. After some years spent in Oregon and New York, he currently lives in his native Latvia. In the past, he has operated a nuclear reactor, translated books and worked in a zinc mine, among other things.

3 finished copies of The Cat King of Havana (US only)