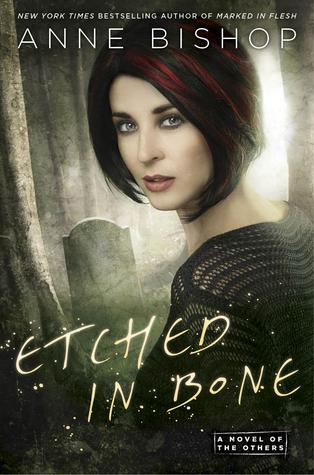 After a human uprising was brutally put down by the Elders—a primitive and lethal form of the Others—the few cities left under human control are far-flung. And the people within them now know to fear the no-man’s-land beyond their borders—and the darkness…

As some communities struggle to rebuild, Lakeside Courtyard has emerged relatively unscathed, though Simon Wolfgard, its wolf shifter leader, and blood prophet Meg Corbyn must work with the human pack to maintain the fragile peace. But all their efforts are threatened when Lieutenant Montgomery’s shady brother arrives, looking for a free ride and easy pickings.

With the humans on guard against one of their own, tensions rise, drawing the attention of the Elders, who are curious about the effect such an insignificant predator can have on a pack. But Meg knows the dangers, for she has seen in the cards how it will all end—with her standing beside a grave.

You guys must know by now how much I adore this series. Imagine my surprise when I gave it 3.5 stars. All of the books have been 5 star reads for me. Looking back, I can see that I really felt this way about Murder of Crows, in a way. This is by no means a bad book, I just didn’t get all the feels that I got with the others (no pun intended). I feel like this should be book 3 or 4, and Marked in Flesh should have been the ending for this series. Well, what the hell do I know? It’s still an enjoyable read, but didn’t quite pack the same punch that the previous books did. Still, you cannot forgo reading this one if you want to see how it all ends.

Speaking of endings, the last 20% or so is very intense. I was on the edge of my seat the whole time. I damn near started crying. NO LIE.

If you think Asia Crane was annoying in Written in Red, then Jimmy Montgomery is gonna be more of a nuisance. The man is just so……Ugh! He made me want to become violent. I am so not a violent person. To think that a man like that was raised by someone as sweet as Twyla Montgomery, and is the brother of an honorable man like Lt. Montgomery, just doesn’t even seem real. There are the black sheep of families, but Jimmy is on a whole other level.

I don’t want to ruin the plot for you, so I won’t go into detail about the things Jimmy did. He caused chaos, but I just don’t think any of it compared to what happened in book 4. Well, except the end. Ms. Twyla was torn between all three of her children. Sierra Montgomery is one character that I felt truly sorry for. Still, I wanted to give her a swift kick up the behind. I was wrong to think that, but when you read this book you will probably think the same. There was just so much manipulation, scheming and fights for dominance (both humans and others), that I wanted to hit someone.

Simon’s need to protect Meg knows no bounds. Everyone knows what will happen if something happens to Meg. Keeping her safe is as much for Simon as it is the city of Lakeside. Hell, the whole continent, really. She changed everything when she stumbled into the Courtyard all those months ago. I love how they all try to make sure that she’s taken care of. The Elders, on the other hand, had no idea of the extent of Meg’s defenders.

The Elders are arrogant. Granted, they are at the top of the food chain. That doesn’t mean that they can’t be put in their place and learn how to heed warnings. They didn’t listen and there were repercussions.

Don’t worry, there are still lots to get through in this book. The characters all try to work together to keep everyone safe and fed. The events of the last book brought about shortages everywhere. The HFL movement made it hard when it didn’t have to be. Now, everyone is looking to Lakeside for guidance. I can’t say that I blame the Elders for thinning the herds. Still, there are idiots testing the waters and drowning in the process. I’m not sure humans will ever learn that they can’t take what isn’t theirs.

That being said, I may just give the spin-off a try. I thought that it would star a character that we meet in this book, but I was wrong. Which is a bummer because I really like her. Feminism is something that the Others are for, so it would have been nice to read about the adventures of the female deputy who would accompany a Wolf in keeping the peace in Bennett. Dang Bishop, that would have rocked!!

Overall, I enjoyed this last installment. Maybe not as much as the previous books, but it’s still one that needs to be read. Especially if you love these characters! The human pack, Vlad, Simon, Henry, Tess, Sam, Skippy, Nathan….they are all dear to my heart. I’m so glad that I gave this series a try last year. I’m pretty sure that I’ll be rereading them all over the years. It may not be as crazy as the other books, but it is definitely one that clarifies why I fell in love with this world and its characters in the first place.

Also in this series: Written in Red | Murder of Crows/Vision in Silver/Marked in Flesh

25 thoughts on “Review: Etched In Bone by Anne Bishop”