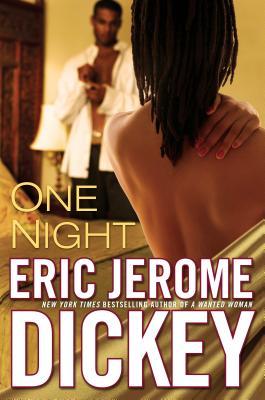 Filled with all the hallmarks of an Eric Jerome Dickey bestseller—erotic situations, edge-of-your-seat twists and turns, and fun, believable relationships—One Night will delight Dickey’s existing fans and lure countless new ones.

This has got to be the best book that Mr. Dickey has written. I’ve not read all of his books, but I’m damn close and I just don’t think that another book can compare. He has a way with words that I can’t explain. The man knows his way around the worlds of sex, suspense, mystery, adventure, and a slew of other genres. Even after finishing this book almost 36 hours ago, I’m still thinking about the guy from Orange County.

This book is based around one night; hence the title. It involves con games at the gas pump, a Denny’s, a movie theater, a 7- Eleven, an upscale hotel room, assault, attempted murder, and the most erotic-ovary bursting-pantie changing- sex scene that I’ve ever had the pleasure (no pun intended) of reading. And let’s not forget the mystery behind the characters, mostly Mr. Orange County. From the very first page I was hooked. Unfaithful-jealous-wives of the world have nothing on the one in this book. I’d like to say the bitch is a boss but that would be putting it lightly. I despise hypocrites of all fashions. If you can’t take the heat, stay the hell out the kitchen.

Guy from Orange County meets girl from L.A. She tries to sell him a Macbook and the rest is history. To say more would give the whole story away. So much can happen within twelve hours. The characters in this book both have their own demons to deal with, but for one night they set fire to the rain. The chemistry between them is undeniable. You will want some LSD after reading this book. No, not the drug! And when it ends, you will be singing along to Jay and Queen B’s On The Run, because let’s face it; “Who wants that perfect love story anyway?”

If you are not a Dickey Nut, then you need to be. I highly recommend, not only this book, but his other works as well. He’s an incredibly talented man and you will not be disappointed when he takes you on a wild ride.

3 thoughts on “ARC Review: One Night by Eric Jerome Dickey”