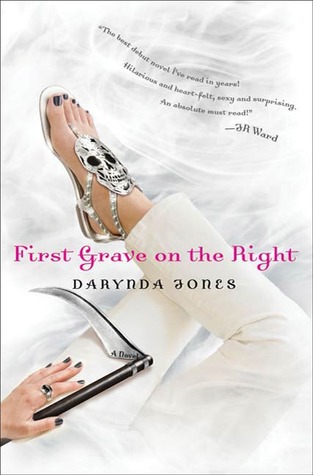 Charley sees dead people. That’s right, she sees dead people. And it’s her job to convince them to “go into the light.” But when these very dead people have died under less than ideal circumstances (i.e. murder), sometimes they want Charley to bring the bad guys to justice. Complicating matters are the intensely hot dreams she’s been having about an Entity who has been following her all her life…and it turns out he might not be dead after all. In fact, he might be something else entirely.

Why? Why has it taken me this long to start this series?!!!! I could kick myself for not starting this sooner, but I guess now is better than never. Upon first introduction, Charley comes across as a little sarcastic, ghost seeing chick who runs a PI firm. Some of her not-so-funny thoughts and comebacks left me wondering just what the author is aiming for in terms of Charley’s personality. Not everything she thinks and says is funny. I wanted to delve deeper into her character because, well, she came off as one of those offensive comedians. You know, the ones that crack jokes at the expense of others just to get a laugh. Still, I didn’t let that stop me from going gaga over this book. Holy S**t, son of satan, where have you been all my life?!

If you are looking for a grim reaper that kicks butt and forces people to the other side, that’s not exactly the case here. Charley, is more of a case solver. Well, at least in this first book she is. And a big chunk of her history is revealed, but I imagine as the books go on there will be more bombs dropped. She does usher the spirits that linger to cross over – even going so far as to trick some of them. I liked that they could pass through her to get there. I also loved the relationship she has with her uncle Bob. I have to wonder if he loves her so much because she helps him solve cases and looks like the hero to his fellow cops. Not a big deal, either way. Garrett….holy hotness. I love the banter between him and Charley, and I wonder if something more will come out of it. Surely, if Reyes has anything to say about it, there won’t be! F**k, I just can’t get over what/who he is! I hope to get more backstory on him as the books go on. Cookie, Charley’s best friend and assistant, is hilarious. I love how concerned she gets about Charley doing dangerous things and almost getting herself killed everyday.

Here’s what you get in this first installment:

Just wait until you meet Reyes Farrow. You won’t know whether to rejoice or hide in fear of him.

-an abusive a-hole of a husband

-Uncle Bob (who doesn’t know when TMI is TMI. Ewwww)

Aside from annoyance at first meet, I like Charley. I love how she gets info from the dead and uses it for good. She’s not about to let the wrong person get locked up for a crime they didn’t commit. I felt so bad for her at the end, when she received that news. That totally sucked. I hate her stepmother. Yes, I said it. HATE HER. I kinda wish Charley had let Big Bad sever her spine. Who the hell slaps a 5 year old?!! That’s f***ing child abuse! And can we talk about the sexy times? Yeah, total ovary explosion, and it wasn’t even that descriptive. If an author can make you want a being like Reyes to visit your dreams, she’s darn good. I highly recommend this book!

39 thoughts on “First Grave on the Right by Darynda Jones”