Henrietta Lacks, as HeLa, is known to present-day scientists for her cells from cervical cancer. She was a poor Southern tobacco farmer who worked the same land as her slave ancestors, yet her cells were taken without her knowledge and still live decades after her death. Cells descended from her may weigh more than 50M metric tons.

HeLa cells were vital for developing the polio vaccine; uncovered secrets of cancer, viruses, and the atom bomb’s effects; helped lead to important advances like in vitro fertilization, cloning, and gene mapping; and have been bought and sold by the billions. Yet Henrietta Lacks was buried in an unmarked grave.

The journey starts in the “colored” ward of Johns Hopkins Hospital in the 1950s, her small, dying hometown of Clover, Virginia — wooden slave quarters, faith healings, and voodoo. Today are stark white laboratories with freezers full of HeLa cells, East Baltimore children and grandchildren live in obscurity, see no profits, and feel violated. The dark history of experimentation on African Americans helped lead to the birth of bioethics, and legal battles over whether we control the stuff we are made of. 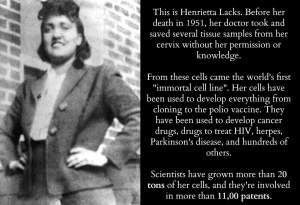 I’ve been holding on to this book for 6 long years. I remember walking into BAM, thinking that I’d browse and see about some cheapies. This book was displayed on a table at the front of the store, and the title and cover immediately got my attention. No matter how much I tried, I couldn’t bring myself to read it. Even when the world was talking about this book and the woman behind it. I knew that it would make me angry. I finally found the courage to read it, and I’m both happy and sad.

Happy because I learned a lot about this woman, Henrietta Lacks; or HeLa to the science community. Happy because of what her cells have done for decades. Happy because without her immortal cells, would there be all the advancements in science and medicine today? No, I don’t think so.

Sad because of what the Lacks family has been through, and didn’t find out until after 20 years, that their mother’s cells have been multiplied and sold, in the name of science. Sad because, if I read correctly, Henrietta contracted HPV- which caused her cervical cancer. And if she wasn’t the sleeping around type of woman, then she got it from her husband. Sad because her last words were for him to not let anything happen to their kids. He failed. And completely sad because the Lacks family are receiving no monetary gain from the billion dollar industry that HeLa’s cells have boomed. 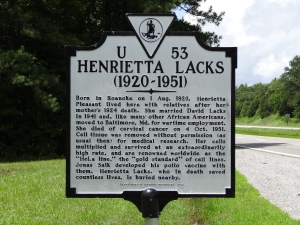 The Immortal Life of Henrietta Lacks is just some history on Henrietta and her family, about the insurmountable experiments that were done with her cells, and the unethical practices of doctors back during a time when black people had no voice to even protest against being violated. They were uneducated, so therefore didn’t know what they were being fed. Henrietta and her descendants are products of slave owners and the slaves that they had affairs with. Which, is sadly, not uncommon. It’s sad that the white Lacks family members that are still living, refuse to acknowledge them. Even when the dead family members (both black and white) are buried in the same family plot.

The doctor who took HeLa’s cells at Johns Hopkins when she was first diagnosed, refused to give the name of the cells’ owner to the press for decades. All the experimenting that was done on the poor at that hospital has never come to light, but I am sure there are more mysteries to be uncovered. I’m sure Johns Hopkins has been turning over in his grave since he died in 1873. His vision for that hospital didn’t go as planned. Instead, it was the complete opposite. I’m not surprised, because as I’ve gotten older and learned more Black History, nothing can ever make the wrongs right.

I like the friendship that was formed between the author and Deborah, Henrietta’s daughter. The way the she helped the family, as much as she could, try to get information about their mother’s cells. It was a hard journey. I cried on some parts about the injustice of it all. I cried for Deborah as a child and teen, because no one should go through what she did. I cried for Elsie, Henrietta’s oldest daughter who died a few years after her, in an insane asylum. She may have only been deaf, but was never diagnosed correctly. And as much as the author may want to evoke sympathy from the reader for Day, I have none. I give zero f**ks about that man. Yes, he was Henrietta’s husband and he lost her. But he failed her when he didn’t protect his daughter from a family predator. He stood by and watched silently. And he was a man-whore. I have no love for him.

This is a great book to read if you want to know some Black History. What this woman’s cells have done, and continue to do, for the world is amazing. It’s sad that it took decades for her to be acknowledged for her contribution. Even if the consent was never given, they could at least have told the family sooner. Instead, doctors and scientists across the world utilized her cells and sold them by the vile. Now, billion dollar companies far and wide are making money while her family members can barely afford health coverage. The messed up world we live in.

I highly recommend reading this book. It’s real and I connected with the characters right from the start. If this book doesn’t make you feel upset about what HeLa and her family have been through, you are not human. It’s honest, sad, raw, funny (at times), and I am so glad that I finally read it.